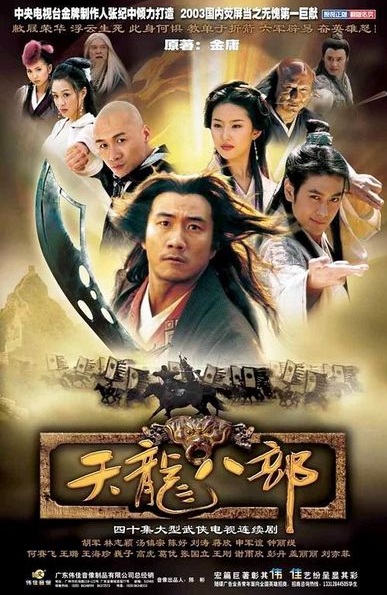 adaption of a Jin Yong novel of the same name. The epic centers around the Beggar Leader Qiao Feng, the Dali Prince Duan Yu and the Shaolin Monk Xu Zhu. Each of their stories are interweaved throughout the show and finally clash and join at the climax of the story.

Qiao Feng’s story is his quest to find his real identity and the mystery surrounding an event that occured 30 years prior that left him as an orphan. Duan Yu’s story covers his meetings with many of his half sisters that he did not know he had (thanks to his adventurous dad during his young days) and the battle with Duan Yuan Qing as the rightful ruler of Dali. Xu Zhu is a lowly Shaolin Monk who gets caught in the middle of an internal struggle of the Care Free Sect, one of the most powerful and secretative sects around. Their stories take place during the Northern Song Dynasty and across warring kingdoms of Song, Liao, Dali, and Western Xia.
Review :
Hu Jun did a good job in this series. He looked the part and had the build and stature for Xiao Feng. Jimmy Lin’s portrayal of Duan Yu was not terrible, but close to it. It was limited to a few cute expressions and he did not really develop the character.All the women in the series were incredibly good-looking including Duan Zheng Chun’s wives.The four Evils were portrayed well except for Nan Hai E Shen, who was too much of a joke. Overall, the supporting cast was good. As with most mainland productions, the scenery and setting were very beautiful. This series is worth watching , though for me 1982 version was much better then this.